Skip to content
You are here
Home > 2020 > MICROmacro, a Do IT With Others Bio-ART workshop 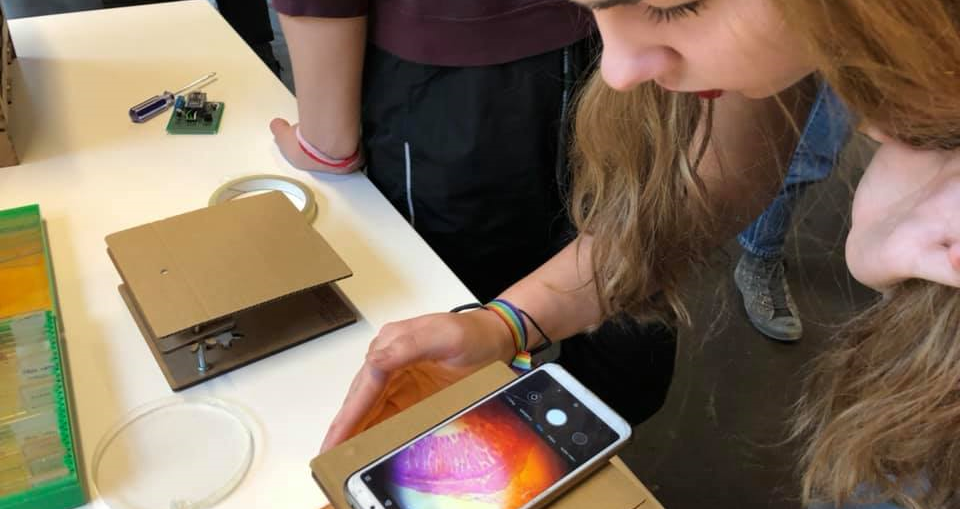 The workshops repeat every day. Duration of each workshop: 3 hours.

MICROmacro, a Do IT With Others Bio-ART workshop

The microscope is a crucial instrument in biology, since microscopy was invented that has made it possible for human eyes to take a look at the micro world and its complexity.

MICROmacro invites kids to an active and participative experience that merges art, electronics and nature. Using our imagination and creativity and learning about electronics, lens, robotics and hacking, we will construct our own low tech interfaces that will help us to approach and explore the microscopic scale .

In this workshop kids will assemble DIY microscopes reusing laser lenses extracted from laser pointers, DVD, CD-roms, led lights and cardboard. This DIY microscope achieves up to 40 times magnification through a mobile phone camera, enough to explore the micro world around us.

Once the microscope is buit, we will focus in the discovering of surrounding life forms (cells, bacteria, protozoos, fungi, virus), structures, forms, textures. The model is open source and inexpensive facilitating to make scientific experimentation by kids at home.

Hamilton Mestizo work primarily explores the interfaces of arts, science and technology and their critical, ecological, and social-culturall implications. In the last decade, Mestizo has combined his artistic practice with education and research focused on open source hardware development, DIY-DIWO culture, new media and biotechnology.

From 2007 to 2014 he had taught hypermedia in Film’s Department at Universidad Nacional de Colombia (2007), biotechnology and physical computing in Design and Architecture’s Department (2008-2012) and Art’s Department (2014) at Universidad Javeriana Bogota. Mestizo had worked at Parque Explora Medellín (2016-2017) where, with a multidisciplinary team, they designed and planned the program and activities at the “Exploratorio” (Public Experimentation Laboratory and Workshop). Moreover, Mestizo has involved with different private-public institutions developing strategies and counseling in pedagogy and education.

Piksel KidZ Lab is supported by the Norwegian Cultural Fund and Vestland Fylkeskommune.

Top
We use cookies on our website to give you the most relevant experience by remembering your preferences and repeat visits. By clicking “Accept All”, you consent to the use of ALL the cookies. However, you may visit "Cookie Settings" to provide a controlled consent.
Cookie SettingsAccept All
Manage consent

This website uses cookies to improve your experience while you navigate through the website. Out of these, the cookies that are categorized as necessary are stored on your browser as they are essential for the working of basic functionalities of the website. We also use third-party cookies that help us analyze and understand how you use this website. These cookies will be stored in your browser only with your consent. You also have the option to opt-out of these cookies. But opting out of some of these cookies may affect your browsing experience.
Necessary Always Enabled
Necessary cookies are absolutely essential for the website to function properly. This category only includes cookies that ensures basic functionalities and security features of the website. These cookies do not store any personal information.
Non-necessary
Any cookies that may not be particularly necessary for the website to function and is used specifically to collect user personal data via analytics, ads, other embedded contents are termed as non-necessary cookies. It is mandatory to procure user consent prior to running these cookies on your website.
SAVE & ACCEPT